Almost every day I drive around east London and when I see that blue fence everywhere I go, I imagine the Olympic Park is going to be huge. But this week, I finally got to see what was going on, on the inside... and what an amazing experience it was!

I was fortunate to be asked to join in on an Olympic Park Engagement Network (OPEN) event and, after an eye-opening coach tour, we were invited into the ODA’s on-site project offices to talk to the team responsible for what is quite frankly the biggest construction project on the smallest site. We heard presentations from David Higgins (ODA Chief Exec and our tour guide!) and Howard Shiplee (Head of Construction and man in charge!) followed by a Q&A forum on how construction work on the Park is affecting the local community. 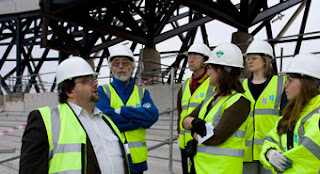 There was some great feedback from residents, local schoolteachers, council officers and religious leaders alike and David Higgins and Howard Shiplee(supported by other key lead colleagues on the construction and procurement team) promised to take back some of the concerns of the residents. This included things like improving pedestrian access into the Olympic Park from places like Victoria Park and Wick Lane, the legacy of some of the venues, especially the BMX track, and the ODA’s commitment to local labour and local business opportunities for local people.

As someone who works closely with local residents in not just the Host Boroughs but across the whole of east London, this subject is something quite close to my heart and it was good hear commitments from the ODA’s Delivery Partner and from colleagues from the new Employment and Skills team that now the major contracts have been tendered and commenced, there are likely to be hundreds of smaller opportunities for business contracts and thousands more job opportunities over the next four years.

I explained how the original Games Bid was won promoting 'inspiration' and that from the minute the announcement was made, phones started ringing asking 'how can I get involved' or 'how can I pick up a contract?' and that my biggest job is managing expectations of those entrepreneurs and would-be entrepreneurs keen to become London 2012 businesses!

The London 2012 Games has really fired the imagination of the business community not just in east London but across the whole of the UK. There are local and national programmes already in place to help people turn their business ideas into reality and the easiest way to get involved is to register and publish their business profile on the London 2012 Business Network.

As the ODA enters the foundation-structure-fit out phase of the 'big build', small businesses across the UK should be doing the same.
Look at the foundations of the business, make sure they’re well planned and well budgeted and once that’s done, ensure structures and systems are in place before launching on the final fit-out, telling the world why they’re the best... sound familiar?