I recently visited a small factory owner in Hackney Wick. He’s been there for years and does what most of us do. Drives into work, puts the kettle on, answers some emails, shuffles some papers, puts the kettle on again, talks about what was on telly last night and then picks up with the job in hand from where he left off yesterday.

He asked me to pop down and have a chat about how he can get involved in this 'London 2012 thing' as he’s heard there might be some opportunities for his firm to get involved with. We talked about coping with the credit crunch, how he needs to make sure he stays on top of his cashflow so we had a look at CompeteFor (the chosen website for the publication of London 2012-related contract opportunities), the relative simplicity of getting a presence on it and how it’s likely this will flag up some of the opportunities he’s looking for. After a quick tour of his factory, I asked 'what’s through that door?' 'That’s the back door and its been about a year since I went out there,' he said.

I’ve never seen someone’s jaw actually drop open like I did that day! When he opened the rusty door, much to his astonishment, he discovered he was just a few metres away from the Olympic Stadium site. We were both stunned by this majestic building virtually within touching distance and literally just a stones throw across the River Lea. 'Wow, I had no idea I was THAT close to the London 2012 Games, he said 'and now I feel I’m part of it and that the Games are only three years away, I’ve really got to get involved!'

Later that week, as part of the Olympic Park Engagement Network (OPEN), I joined about 50 local residents, school teachers, sports volunteers and business owners on our second meeting in six months for an incredible tour of the Stadium.

From the outside, even if it's only a few feet away across a river, you don’t appreciate the sheer size of the Stadium. Eighty thousand seats is a lot of bodies and almost all the space has been given up to accommodate the spectators. Two things immediately stuck:

1. There are a lot of toilets going into this building!

2. There are huge number of cranes on site (including a really fantastic mega-crane that lifts the roof supports in place).

When I asked how long it takes to fit one of these huge, white tubular steel supports in place, we were told it only takes a couple of hours. Last week it took me two hours to put a bookcase together... and I’ve still got bits left over... I suppose that’s why I’m not in the construction business!

We then had the honour of standing the middle of the Stadium site by what’s going to be the finishing line of the 100m track. This is probably the only time in my life I’ll ever cross a sprint line but I did feel inspired to get a bit fitter and have now started another diet!

It’s really clever the way the Stadium has been designed. Long-term proposals for the Stadium are that 70 per cent of the seats will be removed to leave a smaller facility in place, and when we spoke to some of the construction managers, one of them got quite saddened by this... 'I like to build stuff', she said 'and it pains me to think about taking it all apart again after all this hard work'.

Looking up from the track, I did feel a bit like Russell Crowe in Gladiator (but without the tigers); the thought of 80,000 people screaming for their favourite athletes, the fantastic Opening and Closing Ceremonies and the unique opportunities to see Olympians and Paralympians virtually on my front doorstep competing in the bowl of this amphitheatre-style Stadium really got the goose-pimples up and, I have to admit, a lump to my throat. I want my kids to see this... I’m convinced it WILL inspire them!

Discussions later that evening focused on the long-term legacy proposals for the Park. Tom Russell, Director of What-Happens-Afterwards left everyone in no doubt that this is a world-class urban regeneration programme that will not only work for the existing and the new communities in the area but for the whole of east London and the fringes around it. 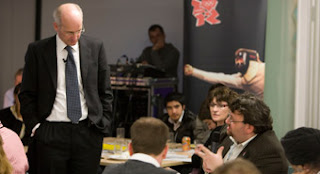 From a small business perspective, it is clear that we’ve got to 'watch this space'. To some, CompeteFor has been a bit premature. Business owners have been fired up and enthused by the prospect of the opportunities that would come out of the project... but quite frankly, the ball hasn’t really started to roll yet.
Most of the big stuff’s already procured and most of that seemingly construction-related; only now are we starting to see the roll-out of the business opportunities that smaller businesses can get involved with from LOCOG - the London 2012 Organising Committee, the privately funded company responsible for staging the Games.

The factory owner at Hackney Wick is now really gearing up! He’s passionate about making sure he’s got it right and that the support mechanisms out there help keep him on track. He’s changing the way he works, keeping a close watch on his core business needs and doing his best to ensure he and his business have the skills, the capacity and the capability to do business between now and 2012... and beyond.
All I needed to do was to open his eyes to what was literally going in his own back yard and to help him understand that he needs to be getting himself ready now to ensure he’s well and truly 'open for business' in the future.

Find out more about London 2012 business opportunities via the London 2012 Business Network http://www.londonbusinessnetwork.co.uk/
Posted by Unknown at Monday, March 14, 2011