A new Piece of London - The Olympic Village 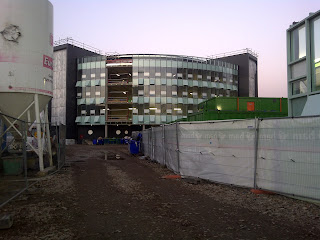 When they call it a "village" it really doesn't do it justice. Images of a ducks round a pond, old ladies on bikes visiting the community post office and the populus all wearing tweed & green wellies are completely shot to pieces when you see the new Olympic Village.

Built to house the 17000 ( yep, 17000!) athletes for the London 2012 Olympic & Paralympic Games in London's East End, the sheer density of development, the look'n'feel of the place and the proximity of it to Stratford, Leyton and Paris (just two hours away) is just mind-blowing.

Looking a bit like the Greenwich Millennium Village on the Greenwich Penninsular (next door to the O2), this is going to be one amazing new piece of London.

Immediately after the Games have finished in Sept 2012, the athletes flats will start to be converted into a range of proper flats from single occupancies to 3/4 person homes. (The Athletes Quarters won't have kitchens as they're encouraged to eat together outside of thier own rooms and "bond" with the rest of thier squads).

Built in the style of the greenspace squares you'll find in Hackney and in Mayfair, each block will become a community in its own right but they won't be isolated from each other. Cafes and Shops will be built into the developments and these will all be connected by local pathways and connections to bring people together.

As we all know most dense housing developments will create pressures on existing local school, health & recreational services....but not this one. A new school, the Chobham Academy (see pic above) and a new NHS "Polyclinic" are to open pretty soon and with the amazing parklands of the Queen Elizabeth Olympic Park, the shopping of Westfield's Stratford City all literally in your back garden, this is going to be one helluva place to live.

The the thrill of becoming one of the "founding fathers" of this new piece of  London, makes it a very tempting investment opportunity and its unique vibrancy/throb/pulse will ensure this is THE real legacy from London's Olympic & Paralaympic Games in 2012.

But don't get too excited yet! we won't be able to buy one of these properties until probably 2015.......So let's start saving ! 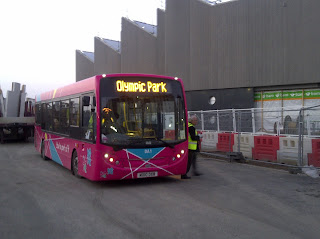